This week we’ve been celebrating a “Decade of D” (formerly known as Dyl Pickle), and I had the privilege to spend a full day with him on birthday eve in order to have a Celebration of 10. D loves all of his birthdays, much like his AJ, but hitting double-digits prompted him to amp up the celebration even more. His actual birthday was Wednesday the 11th, and he had declared that the day be spent at Six Flags Over Texas with just his mom, dad, and brother, but that meant he wanted individual celebrations with everyone else. Of course! The weekend before July 4th was spent with my parents out at their lakeside camping site, so D made sure to declare that the day would also feature a moment of birthday celebration in his honor since the whole family would be there. But I already had another plan in place for this Celebration of 10, and I was able to pull it off this past Tuesday. A glorious success!

This summer I’ve been hosting Camp AJ for Mister D (more on that coming soon) so I made this week’s “camp day” all about the 10th birthday. I hand-crafted a banner with the words that D had declared must be hung in my flat and added 10 balloons to the (budget) decorations. D had also declared that everything had to be “in tens” for this birthday, so I picked up his favorite donut holes with sprinkles and added a candle to round out the sweet treat to the number 10. I planned a page in his new art journal (my birthday gift to him) that featured the number 10, and D wanted to “absolutely make a t-shirt with 10 on the front.” Camp AJ is usually 4-5 hours, so I kept our projects to a minimum on this day so that D could really soak up the birthday celebration. As it was, he and his brother were returning to my flat that same evening to watch the MLB All-Star Game with me (a tradition of ours), so there was only enough time left in the day for his mom to shuttle the birthday boy to martial arts practice before both boys came back for the night. A busy day, but with all focus on the last boy, it was truly a celebration!

First we had the requisite photo shoot while D checked out the decorations. His mom and I snapped furiously in order to catch a decent photo before D got over it all and bailed. Of course, in the midst of everything, the older brother just had to photobomb. Haha!   (click photos to enlarge) 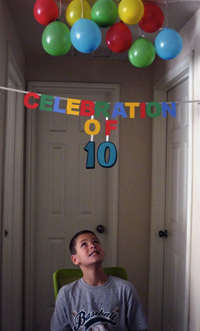 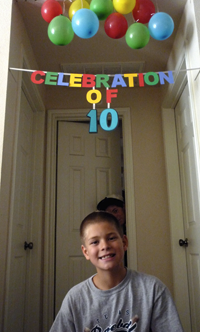 The birthday t-shirt project didn’t quite go as planned but D was satisfied with it. His mom found a cool idea and used the Silhouette to cut a stencil from freezer paper which was ironed onto the t-shirt to secure it (such a great technique!), and then D and I attempted to use rubber stamps with StazOn ink pads to insert patterns and birthday images into the “10” stencil. Unfortunately, we couldn’t get the ink to stamp dark enough on the shirt, and I didn’t have the paints to use as backup, so D opted to use Sharpie markers and just hand draw our patterns onto the shirt. It wasn’t neat and it wasn’t as easy, and D got bored with the project very quickly, but we did manage to make it work. I think it was his decision to outline the number that made all the difference in how the design turned out. And D wanted to put the shirt on immediately after we pulled the stencil off. That’s always a good sign! 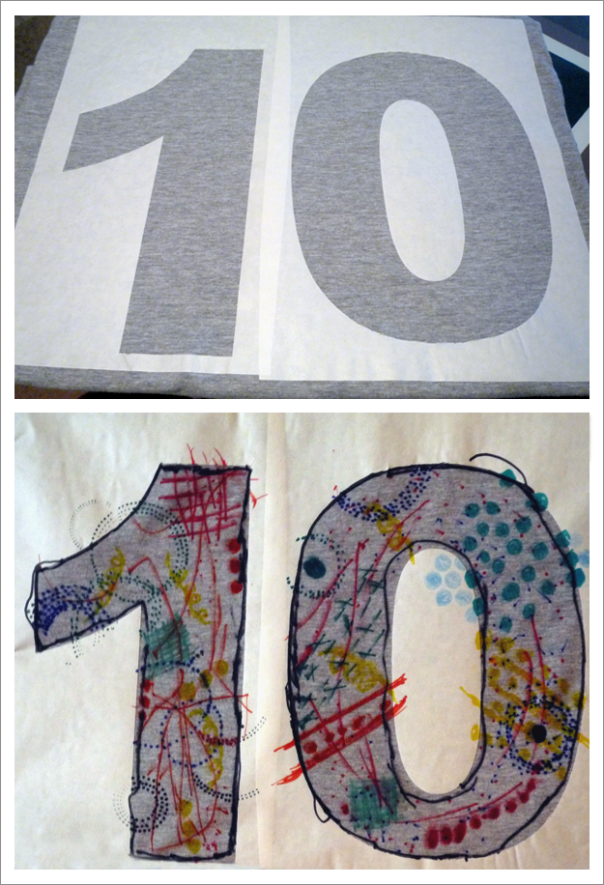 For lunch we made personal pizzas from a loaf of crusty bread, a bit of spiced tomato sauce, and LOTS of cheese. D also decided to try Italian sausage on his pizza, and he decided he liked it, too! 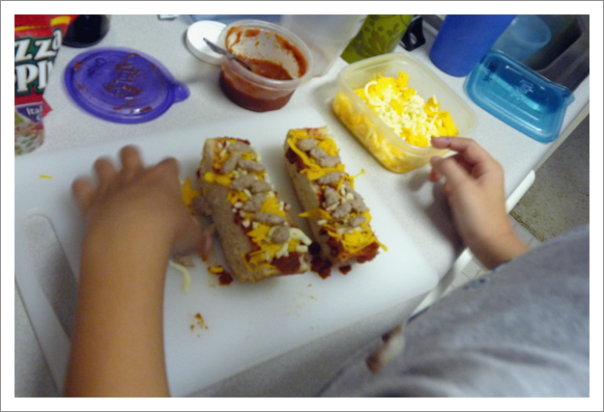 We opted to skip the art journaling in the afternoon and decided to spend some time reading instead. After a little grumbling because I wouldn’t let him read the same old young reader books that he always reads at my house, we finally decided on two old favorites from my childhood: Christina Katerina & the Box, which was read over and over and over by me and my sisters while growing up, and Winnie the Pooh: In which Eeyore has a Birthday and Gets Two Presents, which seemed very appropriate for both the birthday aspect and because D’s mom introduced Pooh to both the boys at their births. I had D read Christina Katerina first and then I followed with the reading of Eeyore’s story, and it was a nice break for both of us in the middle of the afternoon. Plus, these extra 57 minutes of reading pushed him over the reward mark on his summer reading log! And that means sno-cones are soon to follow! 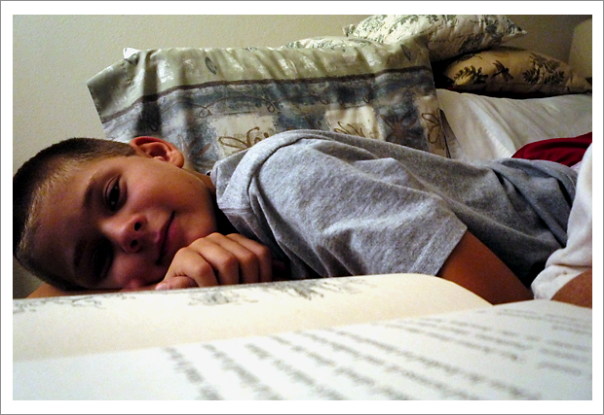 We had only a couple hours break from each other before the boys returned for the evening’s All-Star Game viewing, but I knew that D wouldn’t care much for the actual game watching. He likes the idea of baseball, and he likes live games, but when it comes to watching on TV he’s just not really that into it. He would never stay home, however, because he loves hanging out at my apartment and would never go for letting his brother come over without him joining. They had both been at my place the night before for the Home Run Derby, and I’d let D lie on my bed all night and watch a recording of a Charlie Brown special, but on this night I wanted him to stay busy. So I set up the art supplies and we created that journal page that was cancelled earlier in the day. The idea was a simple “10”, naturally, and I saw a cool border technique in the Big Picture Classes gallery that I knew would be easy for D to create (especially because he’s very into using rainbow colors, IN ORDER, these days). I liked the idea of adding stickers to the page, as well, so I pulled out birthday stickers and some baseball ones, as well. Kids and stickers? There’s just no way to contain that! Since the journal is D’s and I never want to stifle his creativity, I just let him sticker as much as he wanted to sticker. Which made him love his page and work on it for over an hour. Success again! (Notice how he made sure to add team scores below all of the MLB stickers to show his favorite Texas Rangers always beating my favorite New York Yankees. :-D)

To wrap up the celebration we chose to attempt a couple more photos beneath the banner and balloons, and this time D was more than agreeable… because he wanted to take “mug shots” (after seeing it done on a Looney Tunes movie). Awesome! I think these photos totally sum up the Celebration of 10. And I couldn’t have asked for a better day!

HAPPY BIRTHDAY, D! Love you so much!

Posted in People I Love